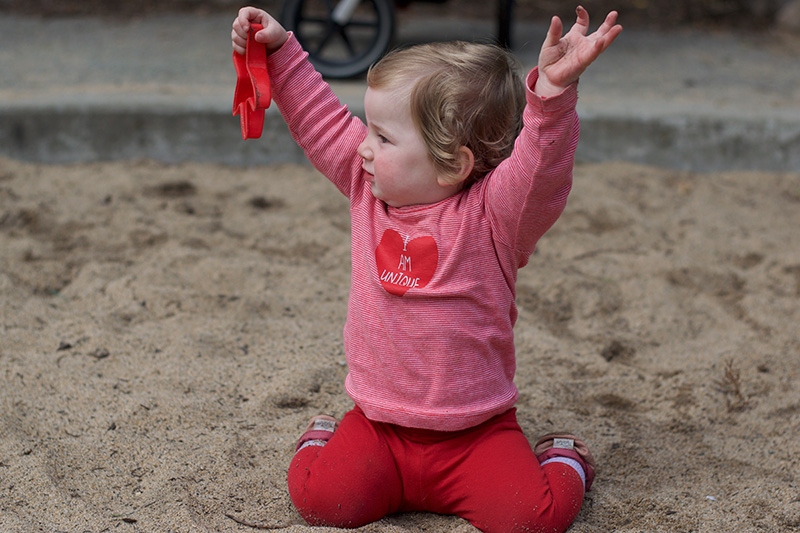 Another week gone! It’s been good to get back into our usual routine this week, as Little M had a break from school last week. He only goes two mornings, but it’s amazing the difference it makes! He’s always calmer on school weeks and we have more of a rhythm going on. The time does seem to fly though! We’ve had a good week, but I’m having to really think back for my list this week – as the time has gone so quickly!

Here we go, here are my Little Moments for this week…

The sun has been shining all week and it’s been so lovely playing outdoors! I took the children to a different playground on Tuesday and we all had fun playing in the sand. LP is in her element at the playground now – a true sign of a toddler in the making – eek!

I went swimming with Little M on Sunday and we had such a blast! He used to go regularly for lessons with his daddy and loved it. But then he moved up a class and stopped enjoying it, so we took a break for a while. Although I told myself we’d go as a family instead, it just never seemed to happen. Well, Sunday I made a real effort and we had such fun together! I think he’s got his confidence back, so we’re going to make sure he gets there every week now – even just with one of us.

Now I’m not talking a spa day or anything ( I wish…!) But I’ve at least had a little bit of time to myself this week – enough to remind myself how much I need it! I have the kids full time – apart from Little M’s two mornings at school, so don’t get much time to myself! But this week I’ve had a bit of time while M was at school and I also went for a swim and a sauna on Thursday – not quite a spa, but I’ll take it! I’ve been trying to be a bit more organised about my afternoons and evenings too, so I can get some blogging time in!

Little M loves the surprise of being presented with a project or idea to work on! Lately I’ve been setting him up with some projects in the afternoons, while LP is sleeping. This week I made him some Play-Doh Dinosaur Eggs – which he loved! He made a little video of himself opening them which I must get around to editing and sharing!

Both kids had their annual medical check up this week – plus shots and a blood test for LP! Needless to say I wasn’t particularly looking forward to it! However I was blown away with how brave Little M was! He’s never liked going to the doctors (even though his doctor is completely lovely!) But, I mean, who does like going to the doctors?! But this week he sat so nicely to have al his checks – blood pressure, hearing and so on. He didn’t even make a fuss about having his shots – I couldn’t believe it!!! LP got very upset, especially during her blood test (fair enough, she’s only 1!) and Little M was so sweet and reassuring to her, it melted my heart. Afterwards we treated ourselves to a Starbucks and I gave myself a big pat on the back!!!

We watched a really inspiring movie the other day called Captain Fantastic. It just popped up on Amazon so thought we’d give it a whirl! I really recommend, it was a really inspirational story about a man who rejects modern day society and takes his kids to live in the wilderness – but after a turn of events bringing them back to modern living.

LP and I were at music class today after a break last week. It’s so sweet to watch her joining in – banging her hands on the drum and shaking her egg shakers! She loves it! I love having the chance for a bit of girl time every week. With International Women’s Day this week, I’ve been thinking about how I want to be the best role model I can be for LP – she is my inspiration!

This weekend we are planning to go for a hike to Sutro Tower in the city (Little M’s idea!) and are meeting up with friends on Sunday.

What little moments have you had lately? What are you up to this weekend?